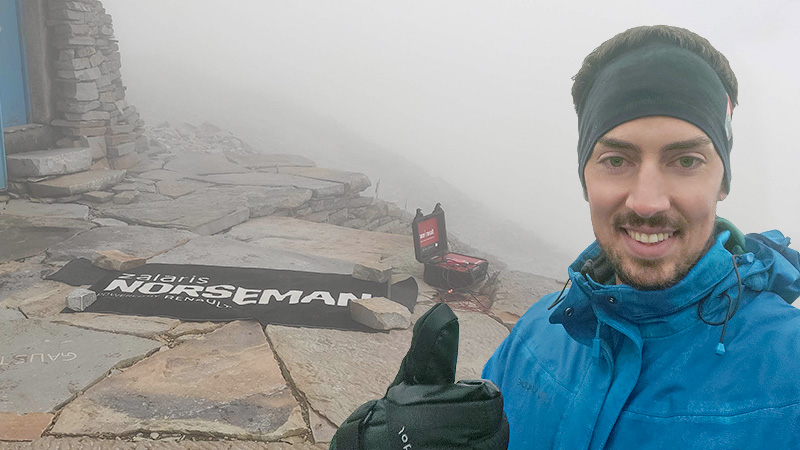 A triathlon of extremes

The Challenges of Timing NORSEMAN

Zalaris Norseman Xtreme Triathlon in Norway is considered to be one of the toughest triathlons in the world. In his report, International Sales Manager Lars Späth highlights a race where even waiting at the finish line can become a challenge:

It starts at 5 a.m., with a jump into the dark. From the ramp of a ferry, three meters deep into the 17 degree cold water of the Hardangerfjord. For around 100 participants (fewer than usual due to the pandemic), the fight against the forces of nature and the limits of their own bodies now begins. Only the headlamps from the accompanying kayaks light the way. The fight will last over 10 hours for the winner, almost 19 hours for the final finisher. I had travelled to Norway, because I really wanted to see and feel NORSEMAN. The setting of this long-distance triathlon is as crazy as it sounds: After swimming in the fjord, the athletes cycle 180km across mountain passes, plateaus and steep descents. Right at the beginning of the bike course, they have to climb the almost vertical mountain slopes from the Fjiord to 1,300 meters. In total, the bike course has an altitude of 2,600 meters. In addition, there is alternating wind, cold or rain - sometimes all at once (this year). The finish line of the 42 km long run is at the top of Gaustatoppen. A rugged, exposed mountain, 1800 meters high, where a stony path leads to a small shelter - the legendary place for triathletes from all over the world.

Norway-based Timing Company RaceTracker has been responsible for timing the Norseman since 2017, relying on RACE RESULT active technology. Being there, of course, I offered my assistance with timing the race. “Jackpot”, thought the guys from RaceTracker and sent me uphill to the finish line to install and monitor the timing hardware there (after all, there is a mountain railway for all non-extreme athletes). "Zombie Hill" is how triathletes call the ascent to Gaustatoppen. Now I know why. As I exit the mountain station, an icy storm is sweeping towards me. Outside temperature is around 5 degrees Celsius, thick fog surrounds me. Helpers are trying to fix sponsor flags with mountaineering bolts. I tape my loop cable to the ground, start the Decoder, install a Track Box a few hundred meters down the hill - then I climb back to the shelter as quickly as possible.

Meanwhile, the racers tackle the bike course. Live split times and a visualization are available on the Norseman website. In advance, we installed 27 Track Boxes along the bike and running route. Additionally, we deployed active systems (3x Decoders, 4x Loop Boxes) at the start, finish and transition areas. The track boxes are proving to be particularly valuable again. The bike course is not closed to car traffic, the 4G network in Norway is well developed. The Track Boxes are simply attached to street signs. They recognize the passing transponders and send their data via the well-developed Norwegian cellular network. Due to the quick setup, Race Tracker can keep logistics and personnel for the triathlon very efficient. Only three people are needed to handle the entire event! The actual timing with the RACE RESULT 12 software takes place online, in a warm hotel room on the track. But back to the mountain: I'm at the finish line with a dozen supporters, photographers and helpers. The storm rages nonstop. Fortunately, the mountain station's souvenir shop has winter gloves. (As a precaution?) an additional hat is given to me, the shivering Central European. We follow the race live on our smartphone and pretty much know when the winner is expected at the finish line. Nevertheless, it seems unreal to me when a man with a triathlon suit and sunglasses emerges from the thick fog. The Norwegian Sæverås Breivold wins the Norseman 2021 in a time of 10:21:47 hours. “Undoubtedly, the hardest thing I have ever done”, he will say later. I think so right away.

“The Norseman is a myth in the triathlon scene,” Daniel Gallaher from Race Tracker told me when I got back to the valley station around midnight. As a Norwegian you can feel his pride in this race. And also his pride as a timekeeper to be a small part of this myth. Tens of thousands of viewers followed the live streams of the races in recent years, 1.3 million results list views were recorded this. Even if the race this year was smaller than usual due to Corona - it is a triathlon that will be remembered. Even if you just stood at the finish line...